I have used makeup as a creative outlet for many years now, and very recently started putting my journey with makeup on the internet for the world to see. With every product I fall in love with, the scientist in me wants to know what makes it different from the rest, which made me do a little digging into the most common ingredients used in cosmetics and their purpose.

Ever used a product and noticed that the oils and water are separating? And then you have to shake the bottle to make the consistency even again? That is where emulsifiers come in. Emulsifiers are pretty fantastic, their molecules have a hydrophillic (water loving) head, and a lipophillic (oil loving) tail, making it the perfect peace maker between oil and water. Some of the most commonly used emulsifiers in cosmetics are polysorbates, laureth-4, and potassium cetyl sulfate.

Preservatives are very important antimicrobial ingredients added in cosmetics to increase their shelf life, and prevent the growth of microorganisms which can spoil the formula of the product and possibly cause harm to the user. The most commonly used preservatives you may find on the back of your favorite product are Parabens, salicylic acid, formaldehyde, benzyl alcohol, and tetrasodium EDTA  (ethylenediaminetetra-acetic acid).

An emollient is a thickening agent that helps the skin retain moisture by slowing down evaporation of water. The word is derived from a Latin word mollire meaning “to soften.” They are most commonly used in lipsticks, lotions, and even treatments for psoriasis. Due to its thickening and smoothing properties, emollients show very good spread ability on the skin and give a nice satiny, non greasy feel. A number of natural as well as synthetic substances work as emollients, such as patrolatum, beeswax, lanolin, mineral oil, glycerin, zinc oxide, and diglycol laurate.

Thickening agents are very commonly used in makeup to enhance the consistency, viscosity, and volume of the cosmetic products, making them more appealing to work with. While some thickeners also have emulsifying properties, most of them have the ability to retain water on the skin therefore acting as moisturizers. Thickeners can be found in completely natural form, such as wax, or synthetic, or semi synthetic. Bentonite, cetyl palmitate, and gelatin are a few examples of thickeners.

Coloring agents have been a part of human culture for the longest time. Archaeologists have dated the use of natural substances being used as tints and dyes as far back as 5000 B.C.

Pigments can be split into two main categories; Organic, which are carbon based molecules, and inorganic which are generally metal oxides. A large range of substances are used to give your favorite products their pigmentation, ranging from mineral ingredients such as mica, iron oxide, chromium oxide, and coal tar, to natural plant derived colors like beet powder and turmeric, or animal derived like cochineal insects which is often found in red lipsticks.

Like pigments, shimmer can be made using a range of substances, the most common being mica and bismuth oxychloride.

White Mica, also known as muscovite, refracts light which upon grinding up, gives it a shimmery effect.
Bismuth oxychloride is used to create a silver pearly effect. It occurs naturally, but is usually produced synthetically and hence is also known as synthetic pearl.

The size of the powder determines the degree of glimmer the product has. Finer the powder, the less shimmery the product will be, whereas larger particles give a more lustrous look

A nice fragrance makes the world of a difference when using a product. No matter how effective a product may be, if it doesn’t smell nice you won’t want to use it. There is a wide range of fragrances that are used in makeup products to make the user experience better. One of my favorite fragrances I’ve encountered in makeup is Vanilla cupcake in Huda Beauty’s liquid matte lipsticks. Yum! 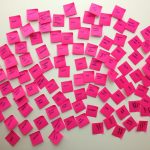 How to pick a Blog Name? 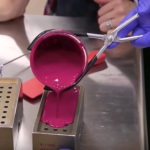 How are lipsticks made?

How are lipsticks made?

How to pick a Blog Name?